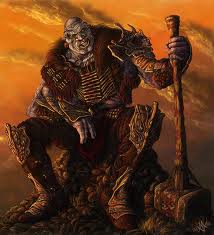 The Drune are a grey-skinned primitive race of savage humans residing in the Underworld. The Drune were once of the Tuatha, human worshippers of the Elven Ever-Queen, who fell into darkness and despair during the first Dark-Rise and thereafter pledged their souls to the service of the Dark. The Drune plot, gather and breed in the Underworld beneath the Middle Sea, carving out an Empire amidst the ghosts and undead of the dark caverns beneath the world of the living. With infernal patience they plot only one thing: the return of the Scourge to the world, bringing about a third dark-rise, and the destruction of all living things.

A warrior society led by demon-summoning Witch-Queens, the Drune gather in great numbers to- against all expectations of a death-loving people, fornicate- fight and revel. That they are mighty in numbers is certain to all those recognise their existence as more than mere myth. Why they yet wait patiently beneath the earth, rather than waging bloody war against the day-dwellers, remains one of the great mysteries of the Underowlrd.

The Drune are a violent people, placing no great value on any life other than their own, and who yet seemingly strive to fulfill their own earthly desires in every respect. Strength and a certain tolerance to pain are highly regarded throughout Drune tribal society, with the greatest warriors, priests and most successful child-bearing mothers marked by many scars and ritual tattoo's proclaiming their great prowess.

Though each tribe is commanded by it's own Drune Mother (A Druidess or Witch) and led into battle by its' Drune Priests, traditional human concepts of gender role do not exist beyond these two roles. A Drune war-chief is as likely to be female as male, and a Drune shaman or witch may be of either sex. 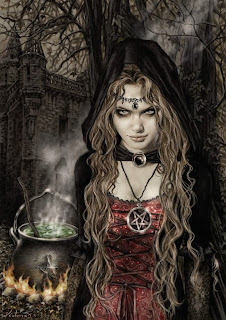 As well as The Scourge (whom the Drune know as the "Dark Mother') the Drune also worship certain demon lords. All are either explicitly allied with the Scourge (at least according to Drune Lore) or are said to share certain goals (Slough Feg, lord of maggots and decay is one such mighty demon lord). Drune armies consist of every man woman and child in the tribe -all living Drune are expected to fight when the tribe goes to war.

All Drune hold each others lives (even those of their children or siblings) as worthless while placing great value on their own. This high value placed on their lives might lead one to suspect that the Drune are cowards at heart, yet they fanatically embrace death as the ultimate form of union with the Dark Mother. Each Drune death, they believe, helping to bring about her triumphant return to wreath the world in darkness and decay. Rather than fearing death, each Drune merely seeks to embrace and experience as much of life as possible before that inevitable last sleep, when they are thrown into the tribes death-pits for their corrupt, earthly form to be feasted upon by maggots and carrion.

These death pits are also the favoured form of execution and sacrifice for prisoners captured in "war' against other tribes or in the infrequent surface raids (especially against the Tuatha) for new "breeding stock". The best of this breeding stock goes to improve the stock of the tribe itself, where the new stock might be mated to many different partners. The Drune have no concept of monogamy. Each Drune ruts with whichever other being -Drune or otherwise- catches their particular fancy. Though most Drune females are careful to avoid rutting with Cauldron-born -unless they wish to endure a particularly painful and grizzly means of achieving their final 'union' with the Dark Mother. 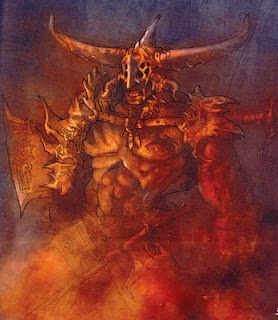 Drune men are massive and bulky, veritable giants among men. Drune women however, are lithesome and svelte as vipers, dangerously (usually fatally) attractive to males of any humanoid race. It is hard to mistake a Drune man for anything but, what with their heavy facial scarring, tattoos and many piercings of bone and horn. Drune women, on the other hand, are more subtle in their physical variations from the human norm. Though they share the same, matt grey skin tone as the men, Drune woman do not scar or tattoo themselves as extensively. Instead, they tend to paint their lithe and seductive forms in a  variety of (often toxic) dyes, changing the design and pigments as the whim takes them. With their mastery of poisons, lotions and body paint, Drune woman are more than capable of disguising their unusual skin tones and make fearsomely effective spies. Any Drune encounter on the surface world (save for that with a full war-band) is likely to be with a lone female spy or small band of female scouts. Rumours of fierce "amazons" among the "Dark-Blind" surface worlders may be nothing more than the confused tales of terrified male survivors of such encounters. Such survivors -unless especially pleasing to their captors- are often permanently maimed by the fierce Drune females, but only after the women have their wicked -and all too painful- way with them. 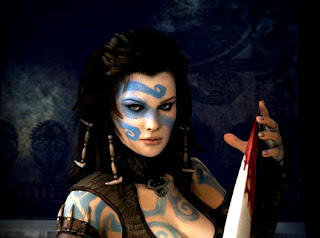 All the more fearsome and decidedly more evil and sadistic even than their men, Drune women delight in torture and bloodshed and exult in combining both of these "hobbies" with the practice of ritual sex and blood magics. Females think nothing of torturing themselves and even their own children in order to test the "strength' of their bloodlines. Like all Drune, Drune women train for battle and bloodshed. But whereas Drune men are huge and bulky warriors who trade blow for blow and sweep all foes before them, Drune women fight as skirmishers and light infantry.

Drune women excel in the use of daggers, javelins and other thin blades, often coated by painful poisons that cause paralysis (but not loss of sensation) rather than death. Not from any sense of mercy, but in order to better prolong the victims agonies.

Drune women also learn the arts of healing, but make no effort to counteract the effects of pain. Drune healing is as much about keeping captured prisoners alive for longer than it as about tending the torn, wounded flesh of Drune Warriors.

To a Drune, a wounded warrior or ill child will either recover or die on its own. It is this complete lack of the "mothering instinct' that makes Drune women so horrific in the eyes of civilised women, such as the matriarchal, female dominated society of Zama. 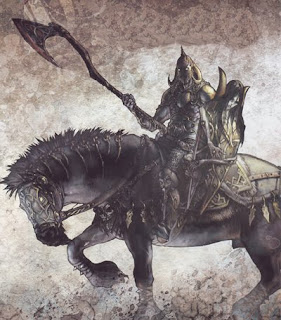 A Drune horde on the warpath is a terror to behold. One that few disciplined armies can stand against without powerful magical support. That the Drune have not yet massed in great numbers to attack the surface world is a mystery beyond the reason of the wisest surface sages. Yet those who know of these terrifying beings are grateful that this remains the case.

Drune armies go into battle accompanied by the unquiet dead of the Underworld in all their forms, from soul-devouring monstrosities such as the Bodak to the reanimated remains of defeated foes. Their warriors forgo armour, shunning all forms of protection save for massive, fully enclosed helms. These helms are often decorated with demon horns with which to terrify their foes. Drune cavalry ride massive, demon-blooded horses that trail fiery from their eyes and whose hooves burn and sear the very stones of the earth they tread upon. Their warriors carry magically strengthened stone axes, arrows and spears into battle, often fighting alongside demons and in an uneasy alliance with allied tribes of Cauldron Born. These Orlocs, summoned by Drune Mothers, are born to an obedience that transcends their otherwise legendary libidinous lusts through strange and oft times brutal blood magics.

The tribes make war on one another only infrequently, preferring to war against the undead kingdoms of the Underworld. Even on those rare occasions when Dune tribes do fight amoung themselves the conflict is a highly ritualised affair; with weapons, numbers and even rules of engagement and time-limits agreed by the respective Drune Mothers before-hand. This strangely ordered attitude carries forward into the recreational internal tribal sports of the Drune, in which fatalities are common and the commander of the winning side sacrificed to the Dark Mother (as the Drune call the "Scourge") as a reward for his skill and faithful service.

Games Notes: The Drune are human characters (almost all of whom have heroic characters levels - mostly barbarian, assassin, druid, rogue or ranger) with the addition of the Dark Vision ability. if you're using the #rd or 4th ed rules, then a high proportion of characters have demonic blood and count as Teiflings or Cambions. Add Warlocks and Avenger (in 4th ed) to the list of common classes. Low physical stats are uncommon to the point of rarity due to their harsh up-bringing and a tendency to through sickly children into the worm-pits to die.

Inspiration for the Drune comes from the evil faction of the same name in the 2000AD comic and the Wendol as depicted in the movie "13th Warrior."Add in a healthy dose of S&M and Drow Paranoia, and you have the Drune of Zama.

Edit:
Development Notes: I created the Drune because I felt the need for an "Underdark' race that represented a foe as evil, devious and downright murderous as the Drow. However, I already had a surface dwelling race of "dark-elves" based closely on the legends of the Unsidhe and the Drow themselves were just so wrong for this particular game world. I wracked my brains for a while and, after picking up an old copy of 2000AD, hit upon the idea of adding the Drune to the game world.

Posted by Dangerous Brian at 11:26

Any relation to the Ix author of the same name?

Nope. I haven't been published in years. All my best ideas seem to go into gaming rather than writing -and I just can't seem to ever get anything finished.

In Zama, the Underdark is the literal Underworld. It is in fact, the outer regions of the setting's equivilent to Hell. So Drune, Undead, Gods-Cursed and Demons replace the traditional Underdark races as foes for the PC's.