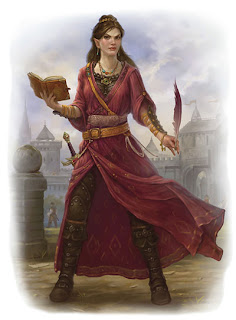 Lysa of Amael, the Glassworker of Trobridge Inn, is something of a mystery. The Trobridge Inn book describes her as a purveyor of glassware, gems, art and other fine goods. It also goes on to say that the Sindarin merchants who visit the town generally trade only with her.

So what's so special about her? Well, for one thing, I have to wonder where she gets the sand to make her fine glassware from. She could fetch it from the nearby river, I suppose, but I fancy that river sand is too course and unrefined to make good glassware. So why would a glass-blower settle at Trobridge Inn, so far from the sea and good quality, fine sand?

It's my expectation (and therefore, the way it's going to be in Osric-Harn) that Lysa is in fact a spy for Evael, the elven Kingdom just to the south of Trobridge Inn. Her position on the Salt Road places her in the ideal spot to monitor any developments in either the Thardic Republic or Kaldor that might effect the affairs of the elven homeland. For one thing, given that Kaldor and Tharda both lack a sea port, a land invasion is their only likely means of attacking Evael (not that a land invasion would be much of a threat, but that's a spoiler for another day). More relevant however, is that her location allows her to gather news from both western and eastern Harn, living, as she does, on the only reliable land route between the two civilised southern regions of the island. She is also in an excellent position to monitor the Korego Gargun and observe two of the three barbarian tribes that neighbour Evael.

Happily, this also makes her an ideal third local patron (with Tirson the Innkeeper and Kurson the Brigand) for the PC's to interact with.

Moreover, while she may be human (Evael also has a small human population) Harnic elves are nearly indistinguishable from humans. The two species can also, on occasions, produce children from unions of elf and human (rare, but not quite to the same extent as on Tolkein's Middle Earth). So, by making Amael an elf or a half-elf, I have a handy relative, mentor or friend for any Sindarin PC's in the party. Perhaps her “glass-blowing” helps hide the fact that she is secretly a mage or alchemist of some sort, merely selling surplus glass-ware brought by Sindarin merchants rather than making it herself. Or, it could just simply be that she is a simple, modest glassworker who just happens to be friendly with a few Sindarin merchants. Where's the adventure in that?

Posted by Dangerous Brian at 11:05

In my opinion you are not right. I am assured. Let's discuss. Write to me in PM, we will communicate.