Old School Miniatures: On the Cheap 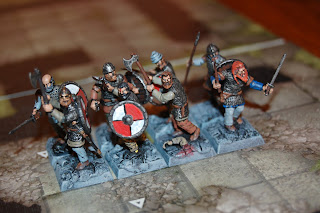 Times are hard. Metal figures are expensive. Buying enough lead figures to make up a decent band of brigands, for example, can set you back forty or fifty euro's. And then, of course, there's the whole new issue that most modern fantasy rpg miniatures are targeted for the modern audience/gaming industry. By which I mean late medieval armour, dress and accoutrement's as opposed to the more traditional "old school" dark-age style.

However, all is not lost. You can still acquire decent looking miniatures for your RPG while keeping up that all important Old School feel -and without putting too much of a dent on your pocket book. The answer: wargames miniatures.

Plastic mould technology these days is so good that it's possible to produce plastic figures that rival (or even exceed) their metal counterparts. Moreover, even metal wargames miniatures (from historical specialists at least) tend to be cheaper than roleplaying miniatures and even most fantasy wargames ranges.

True, you can splash out ten or twelve pounds for a pack of random pre-painted miniatures, but going down that route might cost you a veritable fortune before you get enough figures of a given monster type to use in an encounter. Plus the paint jobs tend to be terrible. Contrast the painted miniatures at the beginning of this article with any of the D&D figures available on ebay. I bought a pack of 32 of these plastic vikings from wargames factory's Hammer of the Gods Range for £18 (You lucky Americans can get them for $19.95). These figures here, 8 of them, took four hours to assemble and paint and cost me the equivalent of £4.50. If I'd bought 8 viking looking types in single figure Reaper miniatures packs, it would have cost me at least £24 (probably as much as £30, depending on where you shop). How many packs of D&D boxes would I have had to fork out for to obtain 8 human warriors in chainmail? A heck of a lot, let me tell you.

As it is, I intend on painting another four of these guys for gaming purposes. The last twenty (plus 8 figures from the Saxon Fyrd box) are going to make a Viking Mercenary unit for my Norman WAB army. The remaining 24 Fyrdmen are going to be split into a unit of 8 archers (on stone, roleplaying bases) and 16 unarmoured RPG melee types. And voila, for a grand total of £36 quid, I've got myself another wargames unit AND all the armoured and unarmoured human NPC warrior-types I''ll ever need for an Old School RPG campaign.

Of course, it would be nice to have some more disciplined looking armoured warriors as well. Which is why I bought 8 metal Norman spearmen from Wargames Foundry for a grand total of £8.00 as well. I'll paint these guys up and use them as henchmen and hirelings for my PC's. Pictures to follow when I've finished painting them.

I also forked out another £8 for a pack of Saxon "outlaws" from the same firm -giving me a nice mix of armed civilians for use in gaming as hapless civilians, prisoners, mule-skinners and even torch-bearers for the party. I'll post up my painted versions here at some point too,

Grand Total: £52.00 for 80 gaming miniatures. How much would it cost to order all that from Reaper Miniatures eh? £300 quid at least, I reckon.
Posted by Dangerous Brian at 23:34

Check out megaminis.com, too ... it redirects to an eBay store with tons and tons of great old school metal minis, cheap. There are some really good bulk deals.

I'm not a fan of plastic minis, but gluing a coin like a quarter to the base of a plastic mini might give it enough weight to get that 'old school feel'...

Thanks. I think I stumbled across that site a few years back but lost track of it. I'll be looking closely at the dungeon dressings especiallly.

Yup! I know what you mean. Generally speaking I uses plastic bases for my figs, just out of preference. But a miniature from the Reaper range can be so much taller than my other figures that my usual basing won't work.
So, with reaper figs I use your nickel method, 'cept in my case it's a 2 pence coin.

i really like the resultant look. Often, it means that, to the eye, the figures from the Reaper range look about right when placed next to my other figs.