Ivashu: The Monsters of Harn

One of the the many excellent design features of the Harn setting has to the the Ivashu: a rationale for incorporating absolutely any wild monster idea from any game setting into your Harn campaign.

Essentially, the Ivashu are the spawn of the “Craven God”, Ilvir, the only Harnic deity actually resident on Harn. Ilvir spends his aeons absorbed in the creation of new life-forms, yet, for some undisclosed reason, he has only a finite number of souls to work with. For this reason, all his creations are sterile. Thus, he will never run out of souls to work with for very long.

These beasts literally spawn in a pit not far from the Trobridge Inn sand-box I'll be using in the early stages of my OSRIC-Harn campaign.

The more intelligent Ivashu speak a language of their own, Ivashi, which I'm going to otherwise restrict to followers of Ilvir and a few specialist sages. Many, however, are semi-intelligent at best. Others are little more than dangerously powerful beasts.

Many of these creatures will (at least initially) seem familiar to gamers from one game setting or another. However, they tend to have subtle but interesting difference. Over the next few weeks I'll be considering some of the more common, “canon” Ivashu; while at the same time figuring out how to incorporate them into the OSRIC rule-set. 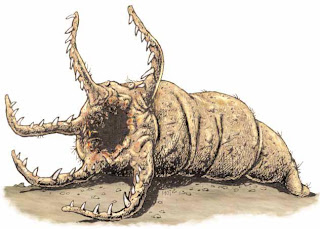 These fifteen foot bloated, be-tentacled worms are found only in the deep forests of the Felsha mountains (which, happily, happen to be found in my little sand-box). The Adwelna grasps prey in its tentacles before slowly devouring them whole over in a period of hours, relying on it's acidic saliva to turn part of the still-living body into mush before cramming in another body part. Luckily, the beasts are apparently quite slow, although they can be relentless in pursuit of prey. They have a “hex” power to stun their prey, helping them overcome their lack of speed.

Mechanically, this makes them rather similar to the Carrion Crawler(c), though of course it's not actually called that in OSRIC. Although the crawler is a bit of a “dick” monster I've always liked it, both as a player and as a DM. For low-level parties, they are manageable when alone and sometimes (barely) manageable when encountered in small numbers. Provided, that is, the party is prepared for them. I wont be using psionics in the HARN-OSRIC campaign, so the Hex power has to go. I might simply keep the paralysis tentacles of the Crawler as a “hex” function, but this seems too easy (or rather, too “dickish”). My favoured alternative would be to replace the tentacle paralysis with a slow effect. This would at least mean that characters would be able to escape it's clutches (at least until they stop and make camp) provided they don't close to melee range.

I'll also drop the number of attacks from 8 to 5 (as the Adwelna has only five tentacles, not eight) and have each attack cause 1d4 damage plus the slow effect. I'll also make it AC3 all over, as opposed to having different AC on different facings as with the Crawler.

Another “run-away” factor that the Adwelna should have that the Crawler doesn't is slow speed. Carrion Crawlers were such a bitch in early editions of D&D because, in addition to their multiple paralysis attacks each round, they were damn fast. Faster than most PCs in fact. So I think I'll reduce the speed to say, 40ft per round, and the jobs a good 'un. This would make them something of an “ambush hunter”, which is fairly in keeping with their traditional campaign role.

Tactics: The Adwelna will attack from ambush, seeking to slow its prey, either through bludgeoning or grappling. Once grappled, a foe will be bludgeoned or and/squeezed until unconscious, at which point it will thrust the adventurer into it's mouth to be devoured (1d4 acid damage per round). It may or may not continue to attack while in the process of feeding, but will certainly defend itself if attacked during this time.

Though semi-intelligent, this may not be evident to adventurers due to its inability to form words. It does, however, understand Ivashi. It may or may not choose to consider Ilvirian pilgrims passing through it's territory as prey. It will, however, always view an adventuring worshipper of Ilvir as such.

Posted by Dangerous Brian at 13:17